We had some really good eats while in Barcelona, and sightseeing and trying local food go hand in hand when we travel anywhere.  Besides the delicious Paella and Jamon, Barcelona has a big tapas culture, which are a bunch of small dishes you eat to make up your meal.  We love this, because it means we get to try even more food! (I’m making us sound like such fatties, aren’t I?)

Taperia Ordesa was a restaurant we tried out that had some of the best tapas we had in Spain.  Each tapa that came out managed to top the previous one, and we left with very happy tummies!

Chicken tenders that had almond pieces in the batter, which made it super crispy and delicious!

It was already our last day in Barcelona and Minh and I still had so much left to see around the city.  We started off by visiting Mercado de Santa Catarina.  It’s a smaller market and has more locals than tourists, so we decided to grab a bite to eat at one of the restaurants inside the market.

Something that we loved while in Spain were the Menu del Dias offered by many of the restaurants.  The Menu del Dia is usually only available during lunch time, and usually includes a 3 course meal for a very affordable price.

After lunch we took a stroll along Barcelona’s most famous district, the Gothic Quarters on our way to the famous La Rambla street. There were some beautiful Gothic buildings such as La Mercè basilica and Carrer del Bisbe.

Once we got to La Ramblas, it was crowded with people (mainly tourists), and we headed into the famed La Boqueria market.

This one was much larger, busier, and noisier than the market we were just in.  I always love walking through markets like these.  It’s so lively and fun to just walk around, taking in all the sights, sounds, and smells of all the different vendors.

Spain takes their Jamon seriously! You’ll have giant ham legs like this greeting you every few blocks.

We made our way down to Port Vell which was even more touristy, and kind of reminded me of the Santa Monica Promenade in LA.

It was a nice stroll, but didn’t feel too different from what we have back home…except for these lovely vendors selling all kinds of counterfeit goods!

All types of “brand name” purses, shoes, sunglasses and more to choose from!

We stopped by a Xurreria to try out some Churros.  They’re different from the Mexican churros we’re used to back home.  They don’t use cinnamon and they usually dip it with hot chocolate.  It was still yummy to me either way!

That night, we had plans to meet with Johanna and Angelo of Turtle Home Travels and their friends Andrew and Greg (whom we met at our Paella making class).  While heading to our agreed meet up spot, we see the four of them also walking towards the meet up spot from the other side of the street.  What perfect timing! Don’t you love when that happens? 🙂

We headed to dinner at Mantura Tapas i Vines, a tapas style fusion restaurant.  Most of the dishes seemed to have an Asian flavor to them, and they were all really delicious.  We later found out that the chef’s wife is Chinese, no wonder it was so good! 😛

This was our first dinner out with other travelers and was nice to have conversations with other people.  Not that I don’t love having dinner with Minh, but if you’re already traveling with each other 24/7, it’s fun to socialize with other people for a change.  Johanna and Angelo share the same sentiments as the four of us talk about the silly fights you endure when you travel with your partner long term (not walking next to each other has been a fight both couples have had, lol!).

However, during dinner it came to light how much all of us not only love to travel, but more importantly, how much we all love to eat really good food! Even after we were completely stuffed from dinner, we somehow still managed to talk about food and the best meals we’ve had so far.

After dinner, we went to check out the Magic Fountains of Montjuic, which is a free show with lights, water, and music. Google maps somehow took us through the back way and we ended up having to go through an area with no people in sight…to a massive fountain and then a stunning view of the city!

Wandering about, unsure if we’re in the right place…

…and then being greeted with this massive fountain to our left

…and even more fountains and a bird’s eye view of the city to our right!

We were all kind of taken aback with a lot of “whoa, wow, where do I look first?” being exclaimed from everyone.

There was a current fountain show going on and it was playing really lively, EDM type music.  We made our way down in time for the start of the next show, expecting a techno water show, based off the music we just heard.

10 minutes into the show, the music stops abruptly and we’re all confused if the show is actually over since it sounded like someone just accidentally turned off the music and the fountain is still lit up.  We decided to make our way down closer to the fountain and the lights turn off in the fountain.

Johanna says, “Well, if you had any question it was over…”

and exactly at that moment, the fountain does this: 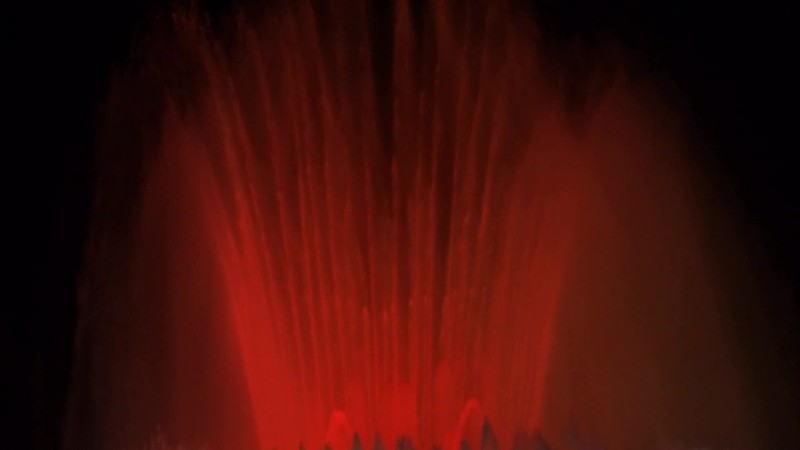 and scares the bejeezus out of all of us! Lol. It went from really mild and sleepy music, to that, while we happened to be standing right in front of it. After a few minutes, the music stops and the lights go out abruptly again and we are all still questioning, “Ok, now is it over?”  Guess you cant expect too much when it’s a free show.  It still cracks me up when I think about it!

We made our way down the hill and said our goodbyes to our newfound RTW buddies.

Angelo, Johanna, Andrew, and Greg, it was great hanging out with all of you, and we look forward to the updates on the rest of your travels!

Our only group photo of the night courtesy of Johanna’s phone!

Barcelona was such a great place to visit, and meeting and hanging with other travelers made it that much more fun.  From the amazing architecture to the great food, it’s another city that Minh and I would like to eventually return to since there’s still so much left for us to see and eat there!

A Day Trip to Cordoba, Spain

Visiting the Alhambra in Granada, Spain