After three weeks in Italy, we were headed to our final stop, Venice. From Lake Como, we took a train back to Milan then transferred on to another train to Venice, roughly 4 and a half hours. I love how efficient and speedy the train infrastructure of Italy is. It definitely makes traveling throughout the country more enjoyable and hassle free.

We stayed just outside of Venice in the city of Mestre. It was very convenient for us as we had both options of taking a local bus or train into Venice without having to actually stay in Venice which sometimes can get very expensive, loud, and crowded at times.

For our first night in Venice, we used a night time walking map that Tiff found online. Walking around Venice at night is much different than in the day time as the majority of tourists have left the city, so the feeling can be quite secluded and eerie at times.

It’s easy to get lost in the hundreds of small streets and turns, but remember, you’re on an island, so you’ll eventually find your way.  It was interesting to walk through dimly lit alleys with hardly anything open and it be really quiet, and then turn the corner and have the whole square filled with loud music and people drinking!

We decided to follow where the locals were going…

…and ended up here!

As we walked deeper into the city, the city became more lively until we ended in San Marco Square. The square was lively at night because of the dueling bands that play every night. There are various classical bands who play throughout the square, and take turns to see who can attract the most people. It was great entertainment to go from band to band within the square.  They played a range of popular and classical hits.

There was a clear best band of the night hosted by Caffe Lavena. You’re welcome to order a drink and sit at one of the tables right in front so you can have an unobstructed view of their performance or join the crowds standing behind the tables to just enjoy the music.

The band at Caffe Lavena played all of their songs with so much passion and they were an obvious crowd favorite. You can see in the video below why. The main violinist had some great facial expressions throughout the performance and the bassist (on the left) was equally enthusiastic with putting his entire body into strumming those strings!  Besides being incredibly talented, they had such great showmanship, they were definitely our favorite of all the bands! 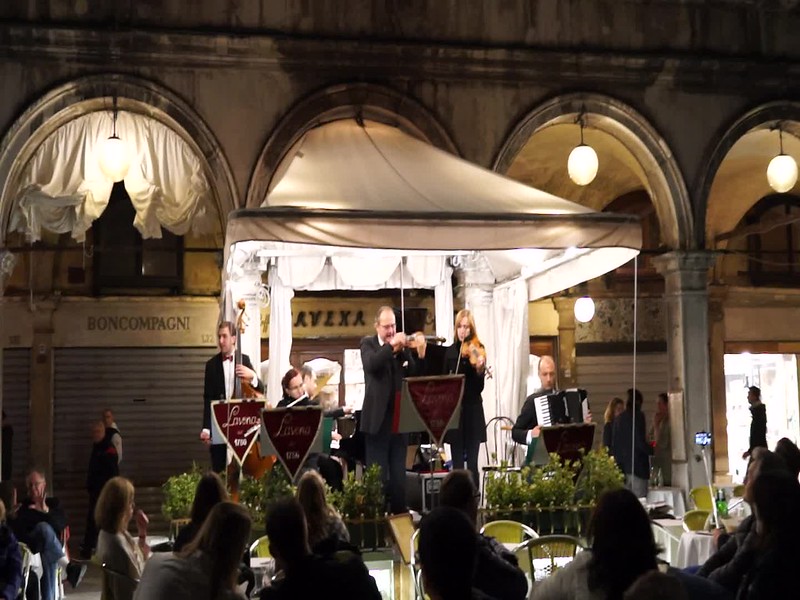 What surprised us about San Marco Square was its shocking resemblance to the Venetian / Palazzo Hotel and Casino in Las Vegas. Our only reference to anything remotely Italy (prior to this trip), has obviously been from Las Vegas. From the canals to the entrance of the hotel it really looks identical. After having visited both sites, Vegas really did an incredible job replicating the major sights in Italy.

Tiff kept saying how this looks so much like the area right outside Tao at Venetian.

As we headed home, our bus was packed with people.  The late night bus comes every 30 minutes, so they are always filled up.  We managed to snag some seats and thought I was safe from having my personal space invaded.  I was wrong, as a man came in just before the doors closed and sat down on the little plastic piece next to my seat.

The following morning, we continued our stroll around Venice, getting lost within the city, and took our obligatory tourist photos.  The city of Venice is so charming and romantic, that you’ll want to take pictures at practically every corner.

We visited the main church of the town which had a spectacular view of the grand canal.

While exploring the city, we stumbled upon a few art exhibits where some of the artists were from Los Angeles.

Venice is also famous for cicchetti which are small bite size appetizers where you order a bunch to share with your friends while drinking together, similar to aperitivo.

Tiff and I usually try to find places off the tourist path to get better food, with better prices.  We went to our first cicchetti bar that seemed to be filled with strictly locals.  It was really intimidating going in as it seemed nobody spoke any English, nor did they seem like they wanted to serve us.  We ended up standing around for a good 10 minutes before we decided to head somewhere else.  It’s always tough finding that balance of a local spot that also welcomes foreigners (that isn’t a tourist trap) when you don’t speak the local language!

After that first failed attempt, we went to a popular cicchetti bar, Cantina Do Spade, where we ordered a lot of delicious seafood cicchetti to share. The bar looked really packed with both locals and foreigners.  There were people standing outside with drink and food in hand, but once we walked in, service was pretty efficient and we were able to squeeze in and find a spot at the bar’s counter to enjoy our food.

We couldn’t spend our last hours of Italy without one last trip to the gelato shop. We chose Grom which is an institution in Italy and famous for their creamy and delicious natural gelato.

The Venice canals is a destination you should not miss when going to Italy. It’s a place we’ve always wanted to visit and is very romantic just walking around, people watching, and getting lost within the city. There’s always something to see, do, or eat in town and it has an old world charm that we love. It was a great ending to our Italy tour!