Our next destination of our Croatian tour led us a 4 hour drive south to the historic city of Zadar. On our way, we had to take a ferry which loaded the bus and gave us a great view of the coastline. A view of Pag on the way to Zadar. This is where they make the famous Pag sheep’s milk cheese

Many of the tourist destinations in Croatia have historic old towns. Zadar is set within a peninsula and is surrounded by the old city walls. We stayed in an apartment within the walls which proved to be very convenient to accessing all the attractions but was also very loud in the morning due to its close proximity to a cafe right below us.

The city was sieged during the Croatian war and our apartment actually had been damaged due to it. Our host showed us the remnants of the damage from a shell that struck the building across and ricocheted on to the balcony railing of the apartment.

The exposed brick section is where the bomb hit, and the damage from the debris can be seen on the railing

It’s crazy to think that this was a war-torn country not too long ago, and you would never know from just walking around, until you see the small physical reminders such as these.

Some of the better known sites to visit in Zadar are the sea organ and the Greeting to the Sun: During the day, the sea organ looks just like a normal pedestrian walkway but creates some beautiful tunes 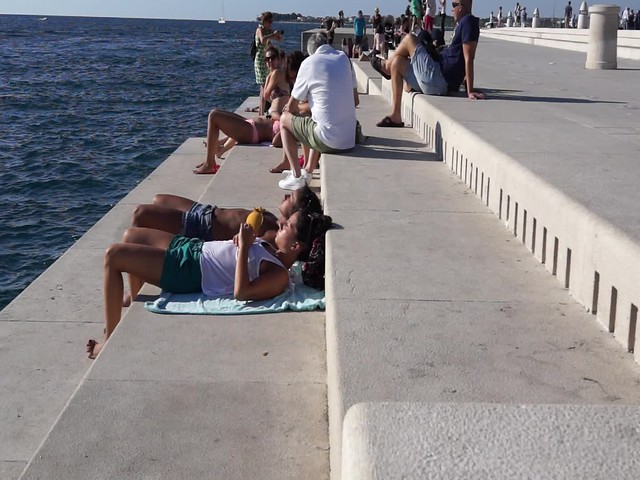 A video of the sound that gets produced from the sea organ, make sure to turn on your sound.

The sea organ at night is painted like a piano. The sound gets produced by the sea waves that move beneath the floor

At night, there is an area that lights up called the Greeting to the Sun. While we were there, they conveniently had a food and beer festival going on.

Fresh sausages getting cooked up Delicious food with an amazing back drop of Zadar Cathedral and its bell tower.

Fresh prosciutto getting sliced up Our first small subtlety we noticed as Americans were the way numbers are depicted with your fingers. At the food festival, the cook told us to come back in 3 minutes for our sausages.  He held up his 3 fingers using his thumb, index, and middle finger.

Tiff and I noticed it right away, and this was exactly our reaction when we saw him hold up his 3 fingers the “non-American” way:

Small things like that you don’t realize it’s a cultural thing until you see it differently and it stands out.  (Gotta give it to Quentin Tarantino who manages to write something like that into a pivotal scene in his movie!) Not as good as the carniola sausage we had in Ljubljana but much better than anything you can get in the States.

One of Tiff’s highlights of Zadar was discovering the Croatian fritule dessert. They are like donut holes with cinnamon and sugar topped with nutella. During our stay in Zadar we also learned to adjust our schedule to the relaxed Croatian lifestyle. Siesta time is observed here as between the hours of 2PM to 6PM the streets were pretty empty. Dinner time at restaurants don’t fill up until after 8PM and people stay out well after midnight.

We noticed that Croatians love EDM music but would never get too wild dancing to it. We’d see a club/lounge playing loud music with a disco ball and colorful uplights and only a handful of people sitting around drinking, smoking and chatting.  This seemed to be common throughout all the cities we visited.  They really embrace the chill lifestyle!

About an hour bus ride away from Zadar is Krka National Park. Thanks to Tiff’s coworker, Sandy, for recommending this place, it’s another beautiful park similar to Plitvice National Park, that allows you to actually swim at the base of one of their largest waterfalls. Our best meal in Croatia was at a restaurant in Zadar, called Pet Bunara. The star dish was the home made pasta with truffles. Being close to the Istrian coast where truffles are sourced, the truffles are fresh and full of flavor here. In addition, cities like Zadar has lots of authentic Italian food due to its proximity to Italy.

Finishing off the meal with pistacchio cake

While I was enjoying my dinner, this animal came up to our table and gave us this look.

I’m sure you guys would have guessed it but Tiff gave it some of her tuna.

Zadar was a fun place to visit. It gave us a good insight of the old town of Zadar and the many attractions it had to offer. The excellent location also gave us the opportunity to visit the beautiful park of Krka.  Another great town that furthered our appreciation for Croatia!