Our last stop of our tour of Croatia was to Dubrovnik.  From Hvar, we took a hydrofoil catamaran that took about 3.5 hours to arrive.

The most important item on our list for this city was to walk the old town city wall. The next day we woke up extra early to beat the crowds.

Here is a video we made of walking the walls:

You might notice an Asian lady in our video who appears to constantly be taking a selfie of herself with a selfie stick. I kid you not she did this on the entire trek of the wall which lasted about 2 hours!

It was a good idea to walk the city walls early as when we finished, the crowds started to come in full force with a majority of them being tour groups. On top of that, the sun was really strong with hardly any shade.

We booked a food tour with Dubrovnik Food Tours which ended up being very tasty and entertaining. Funny thing was that we found out our guide, Hamo, used to live in LA and worked at the restaurant right across from my office, Il Fornao in Santa Monica.

First stop: Charcuterie plate with cheese, bread, salami, proscuitto, and olives and red and white wine at a wine bar.

Second stop: Squid ink risotto + cuttle fish.  Really delicious and was the favorite of all of ours.

Some food tours only offer samplings here and there, but this one was a full portion for each person, so we were completely stuffed by the end of dessert!

In addition to eating delicious food, our guide walked us around old town Dubrovnik through the back streets and secret walkways where tourists would never know to go through.

Hamo taking us through the passageways only locals know about

He also pointed out many sights and locations of where they filmed Game of Thrones; you can read more about that in our previous post.  It was a great tour and would recommend checking it out if you’re visiting Dubrovnik for the first time.

Another landmark we visited was the fort right outside of the city walls, Fort Lvorijaenc. It provided an amazing birds eye view of old town Dubrovnik. This was also a GoT filming location of the battle at black water bay.

The museums of Dubrovnik left a lot to be desired as most of them did not have much content. We visited only a select few, as we decided to visit Lokrum Island instead (separate post to follow).  Keanna and Avinash stayed in Dubrovnik to check out more museums but mentioned they visited a Natural History Musem that had no nature, just pictures.

Another hidden gem our guide showed us was this great bar we went to right on the edge of the city walls with a hidden entrance. If you want to know how to get there, look up Azur Restaurant. It’s right around the corner from there.

On our last day before leaving Dubrovnik, a storm passed through on our way to buy groceries in the morning. We got stuck in a bus shelter and had to wait out the storm. 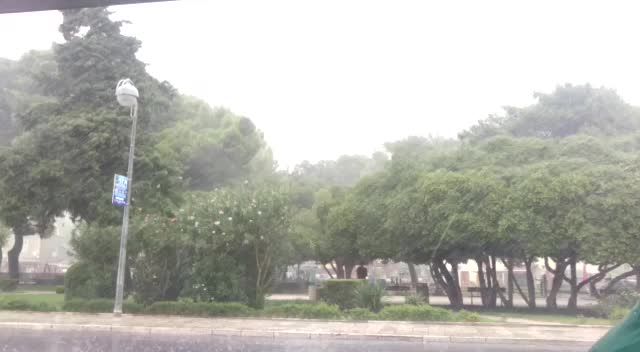 We made a mad dash to a nearby supermarket as we still had some more ingredients to buy. By the time we reached the market, the 3 of us were drenched, cold, and hungry. We ended up having to camp out in the supermarket for a good hour until the rain subsided, which meant we ended up buying a lot of food and snacks because we were so hungry! Another unpredictable and memorable experience!

Dubrovnik is a great city with beautiful scenery and a lot of history. We really liked it as we started to watch Game of Thrones and was able to spot a lot of the areas they filmed. Even if you don’t watch it, it’s still a charming city to visit. I would recommend visiting Dubrovnik soon, as the tourism population seems to be growing more and more. It has not yet become a full on“tourist-trap” destination where everyone is trying to rip you off and everything is overly expensive (however, it has definitely started on the main street of the Old Town Dubrovnik). You can still experience lots of great restaurants and the local culture by ducking into some of the smaller streets in Old Town, as well as outside of the Old Town walls. Dubrovnik and Croatia has become one of our favorite destinations and we hope to be back again soon.